This week has been home to some of the most significant changes to Purity Pole Dancing, Purity will be saying goodbye to Emma and Suze.

Both have been fantastic teachers for Purity for nearly 3 years, but during that time my beloved Pole Dance Teacher job, has become more like an admin position. Leaving me less and less time for what I enjoy the most… POLE! I did office work for 5 years before starting Purity, and some how I have managed to get back there again.

From June, I shall be going back to my original way of running Purity, with just myself teaching. It has been fabulous having the wonderful teachers over the years, Suze, Emma, Lisa, Leanne, Mel and Beth, but I feel it is time to focus more on pole.

The students most affected of these changes were told in class this week. From June Purity will no longer be running classes at Wraysbury, and the classes on Mondays and Wednesdays at West Byfleet will now be with me on Tuesdays from 12th June. If you are able to make Tuesdays, then please get in touch ASAP.

I am deeply sorry for those who are now without a Purity class, and not able to make a new day or location, but I thank you for your support in this, as it has been one of the hardest decisions I have ever made.

On Sunday 5th December 2010 I put on the Purity Christmas Showcase at Hotel de Vie in Farnham. This was an idea given to me by one of the Reading students, Kerri, originally she suggested it was in the studio but I ran away with the idea and made it bigger!! Fortunately she still performed!

I started the night by introducing Jessabelle Polesista, he routine was to Frank Sinatra – ‘Let It Snow’ very fun and consisted of lots of sparkly snow being thrown everywhere, a perfect start to the evening. Once she had got changed she came back on to compare the rest of the evening.

Jess done a fantastic job throughout the night at keeping the guests entertained with her well planned out notes and silly Christmas jokes.

There were 3 student performances, all of them performing for the first time, first up was Kelly dancing to Track One by Swedish House Mafia, even though she was very nervous and the last couple of practice sessions that week hadn’t gone to plan, she done a brilliant job and put in every move that she wanted to.

Next up was a doubles Purity Routine Workshop by Kate and Kerri. This was a routine they learnt in class with me earlier in the year to Bring Me To Life by Evanescence. They looked liked they thoroughly enjoyed themselves during their performance.

3rd on was Ruth dancing to Telephone by Lady Gaga and Beyonce. This was her own routine which she started a few months ago but never got the chance to perform it. Ruth had some funky little steps in her routine, making it fun to watch. She was buzzing once she finished.

After the 20 minute interval the instructors (including myself) got ready to go on.

Suze, our teacher from Wraysbury and Reading went on first. Inspired by the strength moves she gave an awesome performance of moves I am only dreaming about doing. The Jacknife drop springs to mind! it was nice to see she started off with a little Christmas tune before breaking into a rock version of ‘Wicked Game’.

Next up was me, Jolene Redtrip, it seemed a bit unusual for me not to do a Christmas number but I was really into ‘Let you Go’ by Chase and Status. My performance was quite bouncy and was really fun. This was the first routine I have managed to put in the Handspring, partly why I did it first!

Lisa Williams, who used to teach for us in Twickenham was on after me, she seems to have gotten ever so strong since the last time I saw her rock the pole which was about a year ago. her routine had many strong moves and lots of funky dance moves. She was dancing to Video Phone by Lady Gaga and Boyonce.

To end the night on a fun note Emma Park Watt and Beth Hadcroft we all set to do their upbeat performance to House of Pain – ‘Jump Around’, it was off to a great start and everyone was enjoying the tongue in cheek performance, unfortunately about a minute before the end the music cut out and the amp had over heated! Like true stars they carried on anyway and got a massive cheer at the end!!

The night was a high success and there seems to be a growing list of performers wanting to have a go at the next Purity showcase, which is looking like it will be Easter time.

Thanks to everyone involved, Jason for doing the photos, Jess for being our fabulous compare, Claire for keeping the poles clean and warm, Hotel de Vie for being such a wicked little venue, and of course all the amazing performers and our lovely guests!

Looking forward to the next one already, Merry Christmas Everyone!!

Photo’s will follow soon, in the mean time here is the video of my performance:

Thank you to all who came to the workshop on Saturday 5th June at the Purity Studio, even though it was hard work it was still a lot of fun. There was quite a range of students; there were some from my classes in Reading and other purity locations, and some that had travelled from Middlesex and Kent!

We started on the dot at 11am with the Trick Class. Emma assisted me in this class, so that all the students could achieve new things on the pole relevant to their level.

We done a routine to ‘Pump It’ by Black Eyed Peas, despite the sweaty hands all managed to put in inverts which looked very impressive, sorry if the song was running through your head for 2 days after!

The strength class with Steph proved to be rather tough, she seemed all sweet and like butter wouldn’t melt when she arrived, but once she got teaching we all realised how hardcore she was! The 30 minutes was pack full of squats, planks, tricep dips, press ups and other power moves, we all struggled through it and got some good moves to take away with us to help us with pole moves.

The yoga stretch at the end was well needed! Sophie took us through a gentle and relaxing cool down, which ended up revitalising everyone for their journeys home.

The feedback from this workshop has been fantastic, I am planning the next one to run in a couple of months.

Here are some photos from the routine workshop, strength class and yoga taken by Jason Parlour. 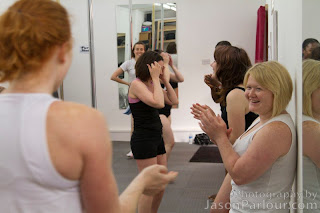 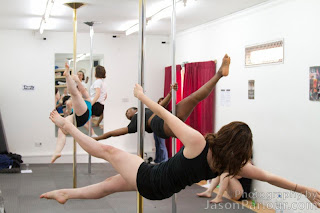 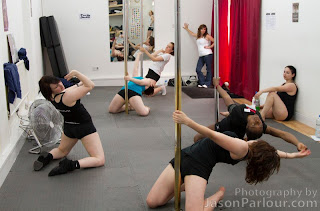 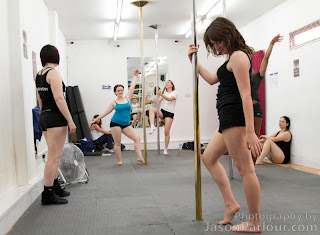 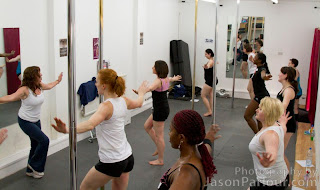 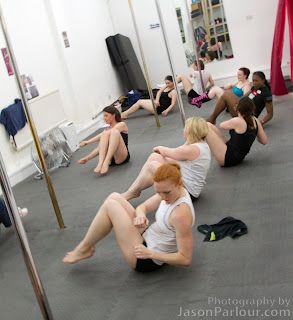 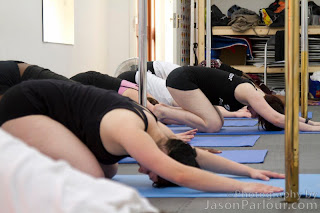 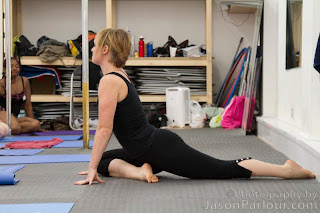 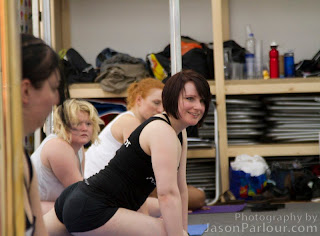 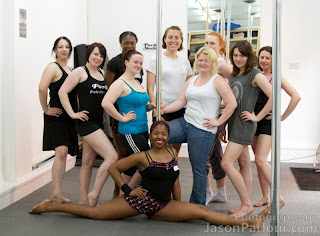 Thank you to all who came to the jam on Saturday, it was great to meet up with you all, have a jam and do some challenges.

Big thanks to Kate Tolhurst who performed a pole routine for the first time ever, she did fantastically well even though being a little nervous to start with.

Purity Instructors – Suze, Emma and Beth did a 90 second challenge to see how many pole moves they could do without feet touching the floor. All managed to do it! as you will see here it was very close between them all!!

My challenge was to let the people at the jam select a song for me to dance to, I didn’t know what it was until it started. Despite the fact I was absolutely shattered I still enjoyed dancing to it. They picked Puretone – Addicted To Bass.

Here is a video of my routine: